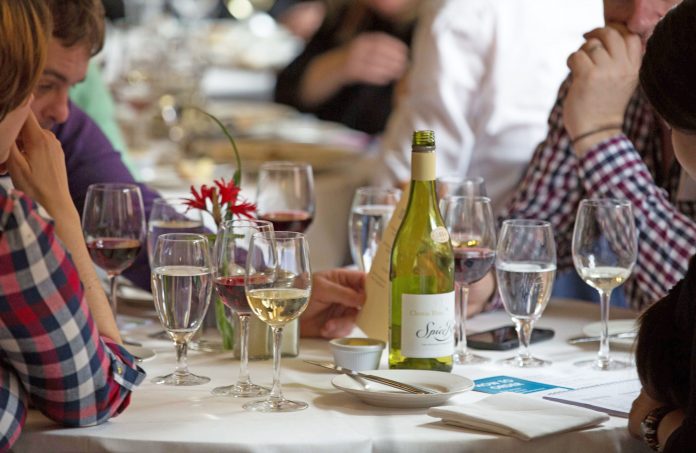 SALES of wine in premium restaurants, hotels, gastropubs and wine bars (premium on-trade) is thriving – despite an overall decline of wine sales in the Great British (GB) on-trade, according to the latest Liberty Wines Report.

A snapshot of the on-trade market, compiled by wine importer Liberty Wines, in partnership with CGA Strategy, shows that wines sold in the “small but powerful” premium on-trade grew +6.3% by volume and 9.4% by value in 2015 against a backdrop of a shrinking total on-trade for wine.

Hotels, which hold the largest share of the market, showed the strongest growth – outperforming the overall market. They remain a strong market for classic wine growing regions and varieties, whilst premium gastropubs are “under more pressure” to increase their market share, lagging behind other premium outlets.

Overall – in 2015- the premium market for sparkling wines grew +32.9% by volume and 58.3% by value. Champagne held the lion’s share of the sparkling wine market selling more than double the volume of prosecco at four times the value. Growth was mainly in London.

On a visit to a premium on-trade establishment, 23% of consumers surveyed order more expensive wine than they used to. However, 29% of female 18-24 year-olds still regularly claim to “pick the second cheapest bottle on the wine list.”

Liberty Wines’ managing director, David Gleave MW, said: “People are drinking less but better. We can see a polarisation of the style and varieties of wine consumed.

“But the wine category is also facing increased competition from craft beers and artisan spirits. We need to work harder to engage consumers, by guiding consumers to ‘drink outside the box’ in the premium on-trade.”

On average across GB the growth of white wine outstripped the overall growth of wine in the premium on-trade.

In 2015, Sauvignon Blanc and Pinot Grigio together accounted for over a third of the overall sales in the premium on-trade – mainly fuelled by wine bars – the heartland for white wines – with 63% market share by volume. Chardonnay was a big winner in restaurants.

Rosé wines, were a definite hit for women, especially in the 18-24 age group, whereas over half of men surveyed drink red wine.

In the red category, Pinot Noir has moved from ‘one to watch’ to a significant player with 82% consumer recognition compared to 80% For Cabernet Sauvignon. Merlot still remains the key variety. Grenache is the grape to watch in 2016 as consumers show interest, especially from Southern Rhône to top end Australian. 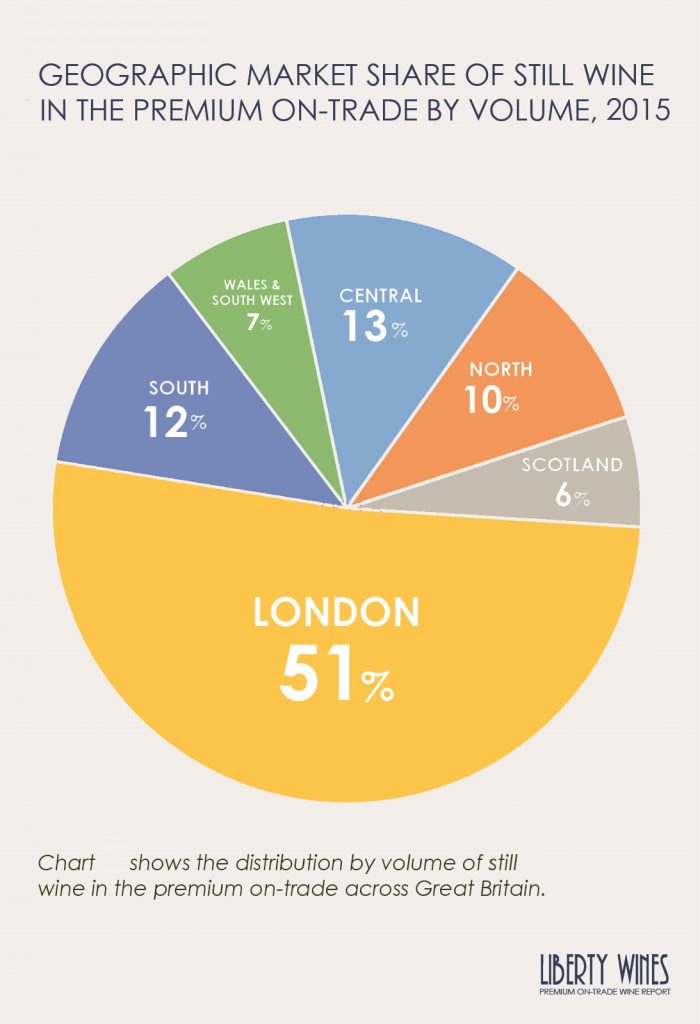 Male and female drinkers generally stick to brands and labels they know with 46% of men going for countries and regions they favour. Both are influenced by friends’ recommendations.

Both women and men are more likely to be influenced by more wines by the glass (39%). Meanwhile, 40% of consumers revealed that knowledgeable staff would encourage them to try new wines – highlighting the importance of quality training in the trade. Female drinkers are, however, more susceptible to food and wine pairings than men.

“The industry needs to up its game and adjust to the changing premium on-trade environment,” said Gleave.

“We are faced with a significantly weakened pound, which will have an impact on wine prices. It is therefore crucial for us to embrace changes, including the rise in casual dining.” 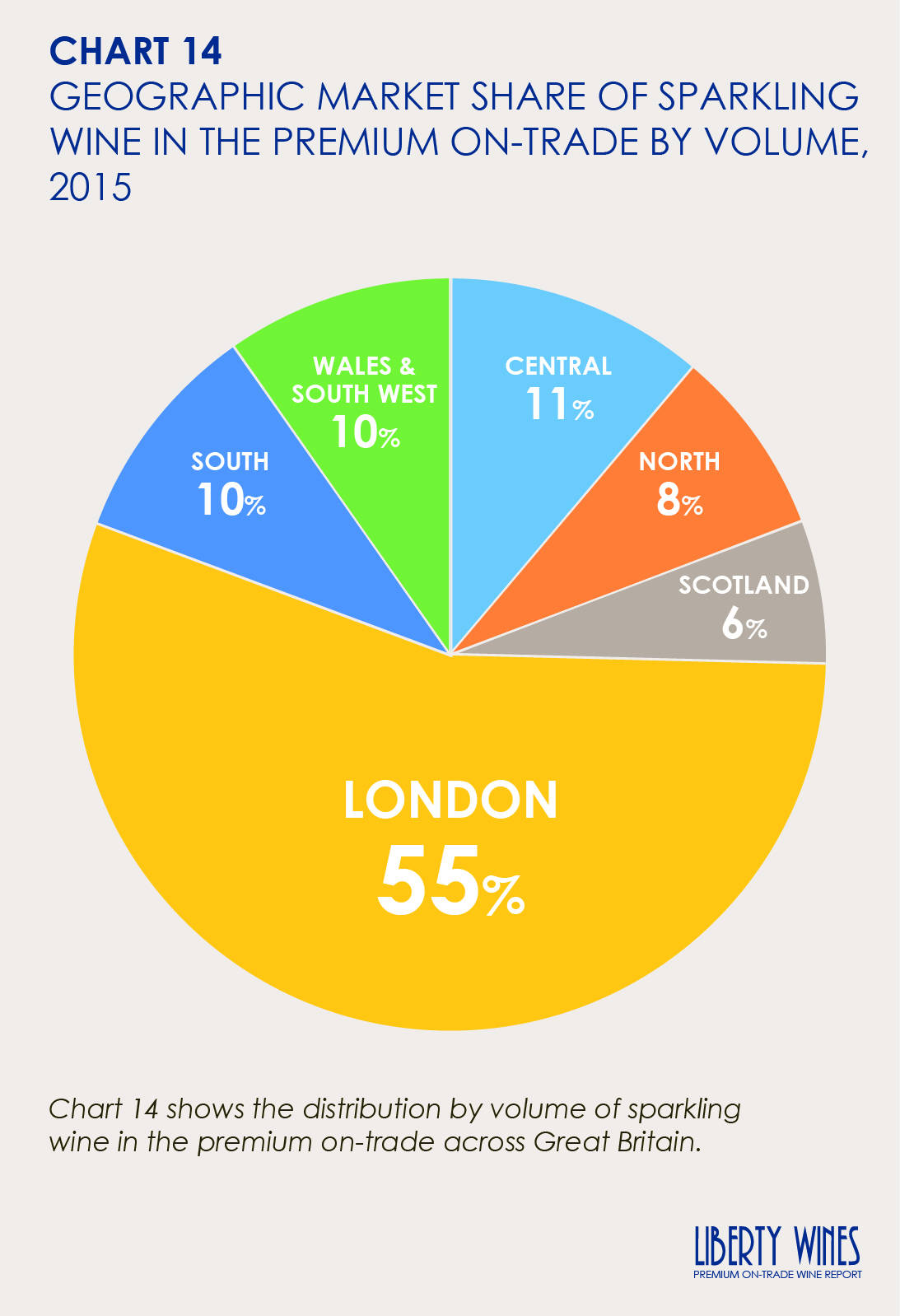 Scotland didn’t follow the Champagne trend either. Sales of the bubbly declined in the region.

Gleave added: “Our insight shows that Scottish consumers are opting to dine at one of the increasing number of premium venues in cities such as Edinburgh and are spending more on wine when they do.

“Although market share in Scotland increased, we are seeing this growth slow down slightly. As we enter a period of potential economic uncertainty we believe the industry needs to adjust to the changing trading environment.

“This includes the rising popularity of casual dining as well as the changing palates and demands of younger consumers, who openly state they look for guidance when ordering wines. Those who embrace these opportunities will hopefully encourage experimentation with different wines among consumers and see this growth pattern continue to develop.”

MasterChef’s Chris Hale: “A large number of captive customers is not...

Review: A taste of the Gourmet Dining Club at Beech Hill...

Forget haggis and porridge – there is more to Scottish food...