Do you know your Roe from your Red or are you Fallowing a little on the knowledge? Venison guru Nichola Fletcher MBE along with her husband John started Britain’s first deer farm and since then have devoted their lives to helping people to appreciate venison and other game meats. She tells Eatnorth how to manage, choose and cook the healthy game.

NICHOLA and John Fletcher started Britain’s first deer farm – Reediehill – in 1973. When they started out very few places sold or served venison. “It was absolutely not main-stream at all,” says Nichola. When you did get it, it was usually not very good, “terribly dry really.”

In those days, the Scots mainly cooked with wild venison and in England, the deer came from deer parks. Venison is part of the English heritage; King Henry VIII, famous for many things including having six wives acquired London’s Hyde Park in 1534 to use as his personal deer hunting ground to escape the stress of being king.

Today, it is crowned as Scotland’s iconic meat. However, many people have not tasted venison that has not been heavily marinated.

“People would marinade it for many days or weeks and slap lots and lots of fatty bacon around it. That was the accepted wisdom,” says Nichola.

“Frankly the marinades were too strong. So heavily spiced and covered in so much wine and vinegar you really couldn’t taste the meat at all. The notion of eating venison that wasn’t  marinated never really occurred to anyone.

“I remember in the early days, giving people unmarinated venison and they would say that’s not venison because they were used to that taste. If you cooked it without wine they just didn’t recognise it at all.”

Following the launch of the first deer farm, Nichola and John embarked on a journey to promote the healthy meat. They held workshops, courses for cookery schools, tutored game tastings, international lectures and game cooking demonstrations for the CLA and Scottish Game Fairs. 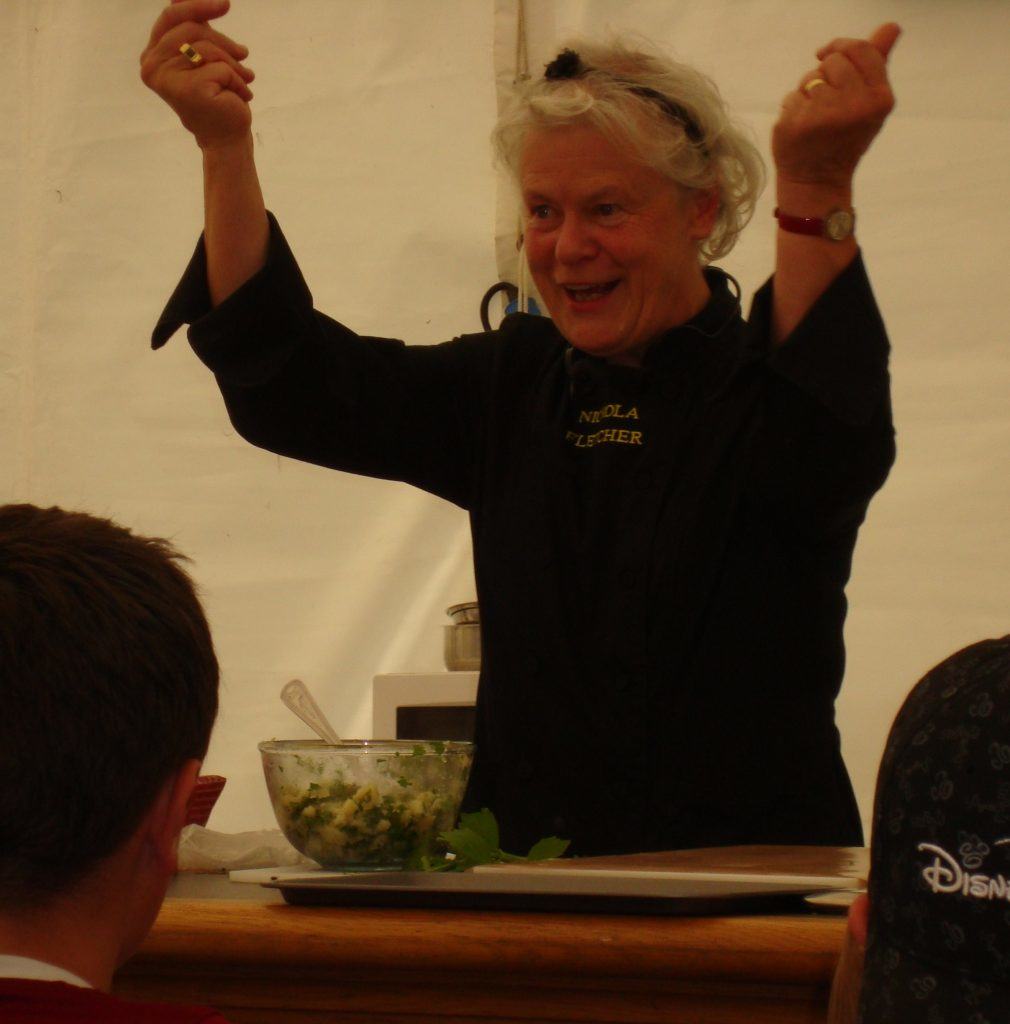 Nichola also worked with the Deer Commission for Scotland on their ‘Best Practice’ events, teaching stalkers how to make the best of their venison.

“I could hear this ruffle at the back of the room and after the session, a young man approached. He was hyper excited saying: ‘oh, I am 21 and I have been eating venison all my life and I have never ever had it unmarinated. It’s amazing, so delicious and I am never going to marinate it again.’

“Historically, if you go back and look at the old cookery books there is no mention of marinating venison unless it’s tainted. They always had it plain.”

For Fletcher, venison works well in high-end restaurants, where each little dish is cooked to order.  In her opinion, it’s the high end restaurants that have made venison popular again.

“But an awful lot of the catering industry has to cope with the scenario of a large group of people who want venison as part of the menu but not as a stew. For the chef, if you have to cook 30-100 portions and get them out at the same time, that is where the problems start.

“It takes a lot of skill and practice to stop the venison – as a steak or roast – from going grey, tough and dry.

“I suspect, that sometimes, catering students are taught so much about health and safety that they are scared to serve the meat pink. But it’s perfectly safe to serve pink venison, just like beef. And if it’s not served pink, it’s not nice at all,” says Nichola.

Nichola, who received her MBE for services to venison in 2014, would really like to see more training in colleges and for the mid-market restaurants to harness the art of cooking venison.

“I would like to see a lot more training on how to pre-prepare the meat and on how to ‘hold’ it so that it can go out to the customer really delicious. The industry is not quite there yet,” she says.

She is the first to admit however, that although she has done many catering events, she has never run a hotel or restaurant. “I may not be the person to explain how to get around the challenges faced in a commercial environment but there are people around now who can. I just want to see it happen.”

Every year the British Deer Farmers Association would do the rounds of hotels for their conferences. Venison was, of course, on the menu.

Chefs and the catering industry need to know about the species of deer they are using. “Deer are not breeds they are different species,” says Nichola.

Only Red deer and Roe deer are truly indigenous. Fallow deer were introduced by the Normans whilst the three Asiatic species, muntjac, Chinese Water deer and Sika deer arrived in the late 19th and early 20th centuries.

In 19th Century English cookery books, venison generally meant Fallow deer. Today, it is most likely to be Red deer venison, though Roe venison is increasingly used in the catering trade and Fallow from England’s many deer parks makes its way into many restaurants.

Muntjac and Chinese Water deer are no bigger than a Labrador where as a mature Red carcase can weigh 40-60 kg.

A male Red deer starts to toughen up from about two years-old onwards, whereas females (hinds) tend to stay tender until around 5-6 years-old. Wild venison, usually being older, is therefore likely to be tougher than farmed, the latter is under 27 months.

The general rule is the smaller the size the finer the muscle and grain of the meat. And the older the animal, the tougher and thicker the sinew.  In a young animal this isn’t a problem as the sinew dissolves but in an older animal it turns into the “proverbial rubber band,” she says.

“In Europe – France, Germany – a menu doesn’t tend to use the generic term ‘venison’ but will specify the species – Fallow, Roe, Red deer etc. – that puts consumers in Britain at a disadvantage in terms of raising awareness. It’s historical really but it would be great in terms of education to follow the European model.”

Nichola believes all venison can be improved by good butchery and good presentation.

“This is where good butchery comes in,” she says. “Over the decades I have been urging butchers to trim up the meat and take off the silver sinew. That improves the meat hugely.”

She warns that if the sinew is left on when frying it will contract very quickly and makes the meat curl up, making it impossible to cook evenly.

Fletcher assures that cooking with venison is not difficult once you understand how the species, cut and ages of the deer impact on the cooking method.

“On one of my stalker cooking sessions, the butcher cut a loin into butterfly steaks – sometimes called a valentine steak. Despite my misgivings, I buttoned my lip as certain groups don’t like to be ‘told by a woman.’

“But when it came to cooking the venison I pan fried his butterfly steaks. Of course they would not sit flat in the pan and were impossible to brown, curling up like butterflies’ wings.  It made my point very well.

“You just have to know what it is you are dealing with. There’s no point using a cooking method that is ideal for really young tender venison then applying that to something 14 years-old that has been running up and down a hill all its life. You should just simply accept what it is you have got and work with it.”

Shortage of venison in the UK

According to the Scottish Venison Partnership (SVP) imports of venison will more than double in the next five years.

At present, 70 per cent of the total annual UK venison out turn is 3800 tonnes, with 70% of this coming from Scotland’s wild Red deer cull.

An increase in imports will come mainly from New Zealand (Red deer) with additional product coming into the UK from Poland, Ireland, Spain and other European countries.

But with the pound plummeting since Brexit, it’s going to push the prices of venison up which is going to compound the shortage even more. This is good news for British deer farmers.

John Fletcher has been instrumental in consulting to help increase the number of deer farms across Britain via The Venison Advisory Service, a three-year programme looking at different management systems of farming deer.

“People can see that there is a serious demand for venison and are going into it. That’s great. But you can’t turn the tap on overnight. The shortage is going to continue for some time and in that time venison from abroad will go up in price.

“Around 20 new deer farms are being set-up. But we are starting from a small base. It will be a few years before more home grown venison really hits the market.”

Venison is a healthy meat. It has also not been bred to do too much such as sheep for wool or pigs for meat. Deer farming only began in the 1960s and that is no time at all in evolution terms. Nobody has been selectively breeding deer they have just managed the herd.

Today, although Nichola, a mother of two, still runs courses and workshops and writes books, the majority of her time is spent designing jewellery and silversmithing for which she originally trained. Her award-winning work can be found in many public and private collections.

Reediehill Deer Farm’s venison brand Fletchers of Auchtermuchty was launched in the 1980s, gaining countless accolades and awards. It was sold to their manager Vicki Banks in 2009 and renamed Seriously Good Venison. Banks has since won many more awards including The Food Awards Scotland 2016 and Guild of Fine Food Great Taste Award 2016.

Nichola is the author of 10 food books including: Ultimate Venison Cookery (2007) – winner of the Gourmand World Cookbook Awards prize for ‘Best single subject cookbook in the world’; The Meat Cookbook (2014); and The Venison Bible (2015) Order books direct from Nichola – email: nichola.fletcher@btconnect.com

For tips on how to cook venision go to: http://eatnorth.co.uk/the-venison-gurus-top-tips-for-cooking-venison