MARTIN Wishart at Loch Lomond, Balloch, was awarded four AA Rosettes. Wishart, a renowned chef, who also has The Shore restaurant in Edinburgh, The Honours in Edinburgh and Glasgow, already has one Michelin star covering two restaurants. He won the title of AA Chefs’ chef of the year 2010-2011. AA inspectors recognised how head chef Graeme Cheevers brings ‘his own productive energies to the Wishart style, which matches a strong commitment to natural produce with head-turning visual display.’

Crossbasket Castle’s restaurant is overseen by the legendary French chef Albert Roux’s son – Michel Roux Jr – and run by executive head chef Alex Thain. Inspectors said: ‘There’s evidence of classical thinking on the menu, alongside a light modern touch and contemporary ideas, and the wine list covers the globe while remaining true to the auld alliance.’

Inver Restaurant is owned by Pam Brunton and Rob Latimer. Brunton spent time at Noma in Copenhagen. The AA said: ‘The menu reflects the seasons and the local terroir, and modern cooking techniques enhance the ingredients to maximum affect.  Children have their own wee menu, and the wine list, like everything else here, lifts the spirits.’

The AA also announced a new Five Rosette award this month for the first time. The restaurant achieving this coveted five AA Rosette award is Gidleigh Park in Devon. Michael Wignall is one of the country’s most respected chefs. He moved to Gidleigh Park in January 2016 and is well known for having a great respect for food and an ever evolving style which creates unique dishes full of flavour, underpinned by a contemporary, less formal approach to fine cuisine. 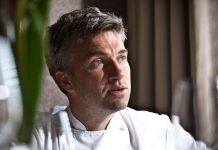 EatNorth catches up with Scott Davies, head chef at The Three...